Cannabis Guide | How to grow cannabis?

Cannabis Guide | How to grow cannabis?

Cannabis is one of the few sexual species in the plant kingdom. The male plant fertilizes the female plants by releasing the sperm contained in its stamens with the wind. To hope for a herb with a strong and heady aroma, you should not choose its seeds like a common gringo. Exceptional quality weed will at worst produce good quality offspring. Know therefore, if you can, select the seeds of the best vintages. The seeds which are likely to germinate have a color which goes from dark brown to light gray with a glazed appearance; sterile seeds are white or gray and have lost their shine and polished appearance taking on a dull tint. After two or three harvests when you have mastered the cultivation process, it will be time to invest in seeds selected from the Dutch greenhouses.

How to germinate seeds?
Guide 2: The germination of cannabis seeds 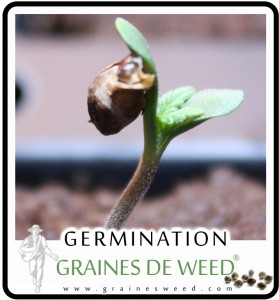 There are three ways to germinate seeds:

* To make the cannabis seeds “go away”, soak them in a glass of lukewarm water to which you will have added a drop or two of bleach to prevent mould. When a small root tip points, remove the seed and plant it one centimeter deep with the tip of the root pointing up.

* You can also use a sprout box, made by covering the upper face of a wooden or plastic box with a transparent plastic film and by fixing a classic 60W lamp in the middle of the volume. Line the bottom of the box with sand then add potting soil mixed with sand.
Plant the seeds regularly, provide permanent lighting and water every six hours using an atomizer so that the earth is always wet; the heat provided by the lamp will develop a warm, humidity-saturated atmosphere that will trigger the germination of cannabis seeds.

* Finally, you can also directly plant two or three potted cannabis seeds.
As soon as the first leaves appear, you must immediately place the cannabis shoots under the neon lights that will illuminate them, twenty-four hours a day.
What do you do after the seeds germinate?
Guide 3: Cannabis transplantation.
When the seed germinates, its root must come out directed towards the sky, it then operates a bend to 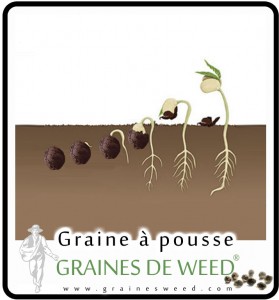 180° to go deeply anchored in the ground. Then the cannabis seed extracts itself from the ground and gets rid of its envelope. Then appear two small round leaves which will soon fall when the first pair of serrated leaves open up.

It is at this point after five to ten days that the cannabis sprout should be transplanted.

If you have more than half a dozen shoots, it is better to plan to transplant them in intermediate containers of the plastic glass type containing the same layers of materials as those described in the first chapter and with holes in their bottom.

This intermediate step will allow you to select the most beautiful and vigorous specimens when they have reached about fifteen centimeters. 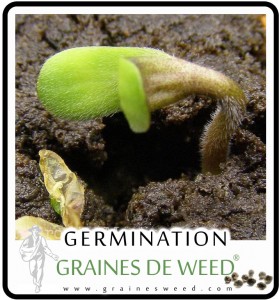 If the germination has given only a few shoots or you are sure of the quality of your cannabis seeds then transplant them directly into large pots. In any case, transplanting is a delicate operation because the surface of the roots of the plants is very sensitive and

brittle. Take care not to cut them or brutalize them. You may lose a few individuals during the operation.

Although it is still too early to distinguish males from females, when the marijuana plants contained by the plastic cups have developed three or four pairs of serrated leaves, after losing their small round leaves, it will be time to select them. and transplant them one last time into their final pots.

How to plant cannabis?
4: Guide to growing cannabis.

You only have a pair of neon lights and have chosen four of your best plants to put in the ground. Now you can release your attention and enjoy the spectacle of seeing the fruit of your labor grow day after day.
Keep lighting at least eighteen hours a day to accelerate growth and prepare for the stage described in the next chapter. 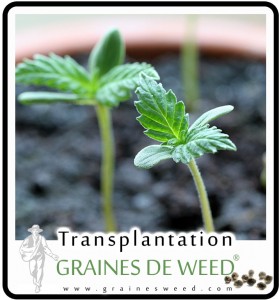 After letting the plant acclimatize for two or three weeks to its new universe and waiting for it to measure at least thirty centimeters, you can add a dose of fertilizer to the watering. Start gradually by adding the mixture only once every three waterings by halving the prescribed dose, then you can increase the frequency but without changing the dosage. You must also prune your plant at least once, as this will give it a bushier look and will increase up 400% bud production. Prune by cutting the plant under the pair of leaves that bud at the end of the plant. The plant will separate into two branches and so on at each pruning (do not exceed the three pruning series and space them at least three weeks apart.)

How to let cannabis flower?
Guide 5: Cannabis flowering.
Your plants have been developing for two and a half months and since their birth you have subjected them to almost continuous lighting. It should be noted that contrary to what certain rumors peddle, this does not traumatize their biological cycle. 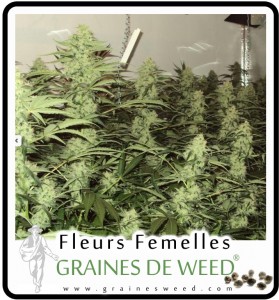 It is then time to induce flowering by lighting your plants 12 to 14 hours a day and leaving them at night in the strictest darkness.
This simulates the transition from summer to autumn by forcing the plant to reproduce.
The slightest light during the dark period, especially during the first two weeks, will compromise flowering. It is therefore essential to observe a certain discipline and to recognize that we are the servants of nature and not its masters. If you have to grow in the room where your plants are, isolate them as best as possible with partitions or pieces of fabric and install a green light bulb (15F) whose spectrum the plant perceives little.

After two to three weeks, flowers will begin to appear and you will be able to begin to distinguish male plants from females:

Male plants are taller and less bushy than plants of the opposite sex. Their flowers appear earlier than on female plants. They are similar to small drooping purses from which leave the anthers which contain the pollen. Care must be taken to pull out the males just before they fertilize the females which would then lose much of their potency. 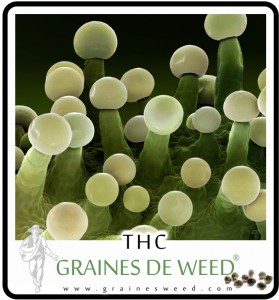 The female plants are denser and more massive than the males; females survive them by 3 to 10 weeks. The flowers consist of white, fluffy pistils surrounded by small cap-shaped leaves.

Most people believe that male plants are only good to end up in herbal teas, this is partially wrong because the THC content of the male plant is only slightly lower than that of the female plant, only the female plant is more fuller, more bushy and develops a large number of floral buds that concentrate the THC.

Great is the temptation when the first flowers develop to want to harvest as soon as possible. And many are the first experiments which seemed successful but leave a 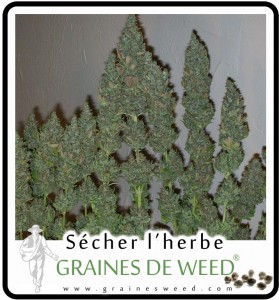 taste of bitter disappointment because of a too early harvest.
During the last six weeks the THC content increases by 50 to 70%; so don’t let your impatience ruin such a long effort.
Harvest time comes when the branches begin to bend under the weight of the flowers; the stem takes on a violet-purple hue but the precise moment of harvest must come when about a third of the flower heads begin to wither and gradually fade. Then uproot your plant and hang it upside down for at least two days.

It is in the delicate area of ​​drying that the greatest number of gummy recipes circulate that will turn your grass into hay if you follow them.

It is absolutely necessary to ban the use of the microwave and the oven is to be used only with well-tested recipes. The principle to be respected is that the water must be allowed time to evaporate out of the plant tissues gradually. 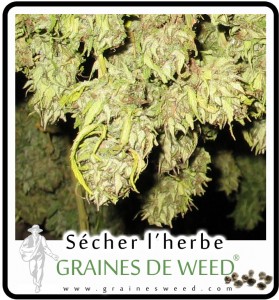 The safest technique to my knowledge is to let the plant dry over a radiator or in the sun for five to fifteen days. This is a method that is still used in Africa and in ganja-producing countries.